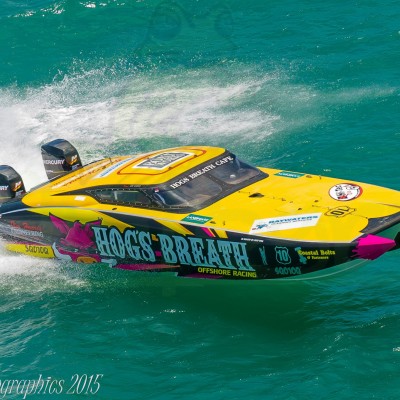 As teams rolled in to Hervey Bay the 2015 championships were still up for grabs in Supercat Extreme, Supercat 600hp and the AUS 1 title.

Saturdays Pole Position Shootout would see who would be on pole for Sundays 2 races,

Unfortunately ‘Yellow Brick Road’ did not make on the water with a rudder issue nor did ‘Hogs Breath’ with a gear shift problem, with both teams fixed by the afternoon ready for Sunday.

‘SUV Ram Trucks’ suffered the worst while on the Shootout course getting the boat on to its side filling the cowl with water and into the engine, causing it to snap and bend conrods and seize the engine, This was the end of the weekend to a team that puts so much into the sport.

The teams enjoyed (and look forward to) towing the boats through the streets, tooting their horns and waving to the thousands of people lining the streets.

Sunday race 1,  Supercat Extreme teams lead off with ‘Maritimo’ (Ross Willaton and Travis Thompson) taking the lead from ‘Yellow Brick Road’(Brendon and Chris Frier) and ‘Team 3 (Tom Barry-Cotter and Steve Jellick), this is how they stayed to the flag,

Supercat 600hp was a little closer with ’Team 88’ (Micheal and Gryff Ethell) and ‘Phantom’ (Paul Gibbs and Mick Walker) taking the lead closely followed by ‘SUV Ram Trucks jnr’ (Taelah Saloumidis and Ian Harris) and ‘Hogs Breath’(Jim Harris and Paul Fowlds),  all the boats were close until on the fourth lap ‘SUV Ram Trucks jnr’ pulled off the course with a broken drive shaft, ‘Hogs Breath’ went on to take first place followed by ‘Phantom’ and ‘Team 88’.

Race 2 conditions had changed with the wind and seas picking up leaving some large holes for the teams to deal with,

Supercat Extreme went the same way as race 1 with ‘Maritimo’ taking the win from ‘Yellow Brick Road’ and ‘Team 3’.

Supercat 600hp again was a close race with the lead changing several times until ‘team 88’ suffered a fuel pick up issue and drifted back, leaving ‘Phantom’ and ‘Hogs Breath’ to fight for 1st place,

‘Hogs Breath’ taking the win followed by ‘Phantom’ and ‘Team 88’,

With ‘Hogs Breath’ winning the 2 races they also won the 2015 Supercat 600hp Championship and also became AUS 1, the first time since 1997 an outboard boat has won the AUS 1 title.

Hervey Bay once again was a great venue for offshore racing, this could not happen without the fantastic local support from Fraser Coast Opportunities, Hervey Bay Boat Club and the Local adopt a team sponsors.

Thank you to our Race director and his crew and all of the volunteers that help over the weekend.

The passing of Ian Trevaskis 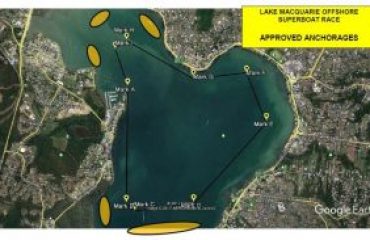